If you’re already familiar with message queueing, or if you’re someone who doesn’t like reading the instructions, jump to the code section below.

I recently came across some brand new terms. So, to begin, some definitions via Wikipedia (they may still be confusing; I try to clear them up below):

The underlined terms demonstrate that you can’t understand AMQP without understanding MOM, which depends on an understanding of distributed systems, which takes you back to passing messages. Kinda circular. Perhaps some further reading will help:

Modern web-scale applications like Google, Twitter, Netflix, LinkedIn, etc. are implemented as distributed systems as opposed to single monolithic codebases. This means that they are composed of tens or hundreds of services that communicate asynchronously with each other, ultimately delivering a response to the end-user.

This means that, for most web development purposes, “distributed systems” can be replaced with “web apps” in our definition of message-oriented middleware. Furthermore:

So what is AMQP actually used for? RabbitMQ describes that:

Messaging enables software applications to connect and scale. Applications can connect to each other, as components of a larger application, or to user devices and data. Messaging is asynchronous, decoupling applications by separating sending and receiving data.

…every time there is a new listing on the platform, a seller updates an item, a bid is placed, or whatever event that could affect the representation of the data, a message is sent through RabbitMQ so each consumer is aware of the news and reacts properly to the event.”

I followed this guide, using the Bunny gem, to get started with RabbitMQ.

Then start the server:
rabbitmq-server

The code snippet below demonstrates a simple example. One application (in line 25) publishes a message that ends up in a queue (declared in line 14) for the second application (lines 20-22) to listen to.

The comments in the snippet explain what’s happening at each step. We connect to RabbitMQ and open a new channel, then declare a queue and instantiate an exchange, so that when x.publishes that message and routes it to q (the queue), that payload goes through. 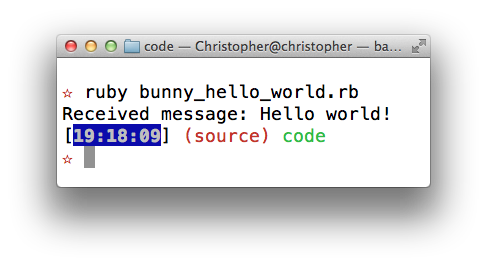 And the contrived example works, when I run the code:

The image below may help make sense of the routing. Or maybe a more complicated example will.

It again works when I run the code:

Notice that there were as many deliveries as there were subscribers (9), and that the order was determined by the order of published updates.

From what I’m told, “this is only the tip of the iceberg” and there are many more features including: