We all know the icebreaker game “Two Truths and a Lie”: each individual in a group tells three statements about themselves; the rest of the group tries to distinguish which of the three is a lie. For example:

(The lie is revealed below).

Context in Programming: Ruby vs. JavaScript

What’s Boolean? Per Wikipedia, “the Boolean or logical data type is a data type, having two values (usually denoted true and false), intended to represent the truth values of logic and Boolean algebra. It is named after George Boole, who first defined an algebraic system of logic in the mid 19th century.”

Some context in JavaScript:

This distinction between primitives and objects is important, as we’ll see in a minute.

JavaScript interprets the following values as false (i.e., if these values were to follow a conditional (if), the conditional code wouldn’t run:

All other values are considered true, particularly all objects.

It’s even simpler in Ruby. The following are false:

Everything else is true!

Is it really that simple?

That said, what we’re doing is evaluating non-Boolean values as Boolean. For that reason, values like 8, “abc”, undefined, and nil are “truthy” or “falsey”. They’re not technically true or false, because only true and false are Booleans.

Proof that this is accurate 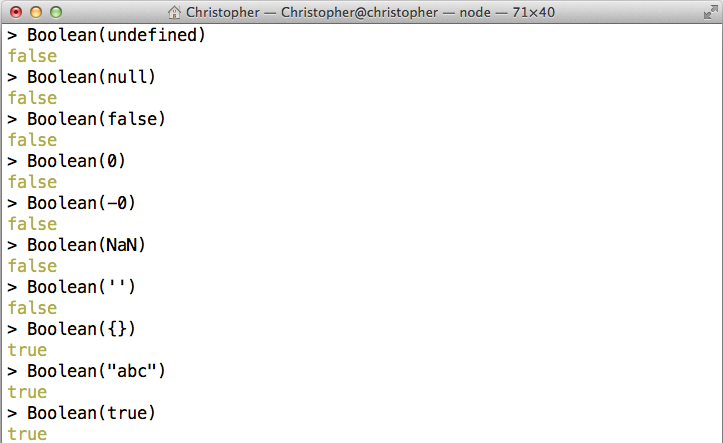 (note, that warning—“string literal in condition”—is telling us what we already know: that a string literal like “abc” is non-Boolean but being evaluated as such.)

For those readers interested in my personal truths and lies…