I am working my way through programming-related reading, currently with Sandi Metz’s “Practical Object-Oriented Design in Ruby”. Click here for more posts about POODR.

Summary: When multiple objects play a common role, modules allow objects to share behavior. Ruby does not support multiple inheritance directly, but does so through mixins, or classes mixed with modules. The Memorial Day example below illustrates modules and mixins.


Remember the strategy of sharing behavior through classical inheritance, which I discussed in this post? It turns out there’s a problem: inheritance cannot combine two existing subclasses. For that, we need to understand roles and modules.

How many types of methods can an object respond to in Ruby? That is, in how many different ways can methods be implemented?

Four. An object can respond to the following messages:

Modules add two of the four kinds of messages that objects can respond to in Ruby. Kind of a big deal. They enable objects to share roles.

Some problems require sharing behavior among otherwise unrelated objects. This common behavior is orthogonal to class; it’s a role an object plays. […] When formerly unrelated objects begin to play a common role, they enter into a relationship with the objects for whom they play the role. These relationships are not as visible as those created by the subclass/superclass requirements of classical inheritance but they exist nonetheless.

When a role needs shared behavior you’re faced with the problem of organizing the shared code. […] Many object-oriented languages provide a way to define a named group of methods that are independent of class and can be mixed in to any object. In Ruby, these mix-ins are called modules. Methods can be defined in a module and then the module can be added to any object. Modules thus provide a perfect way to allow objects of different classes to play a common role using a single set of code.”

The whole point of modules is to enable us to write good code. But Metz warns:

She follows this warning, however, by saying “this very same power is what allows you to create simple structures of related objects that elegantly fulfill the needs of your application, your task is not to avoid these techniques but to learn to use them for the right reasons, in the right places, in the correct way.” The first step in this direction, Metz argues, is to write properly inheritable code.

Being Memorial Day and all, a simple example of modules and mix-ins, in which the MemorialDay class mixes in both the May and Holiday modules.

Note: there is a difference between include and extend when mixing in modules—include is for instance methods, extend for class methods. 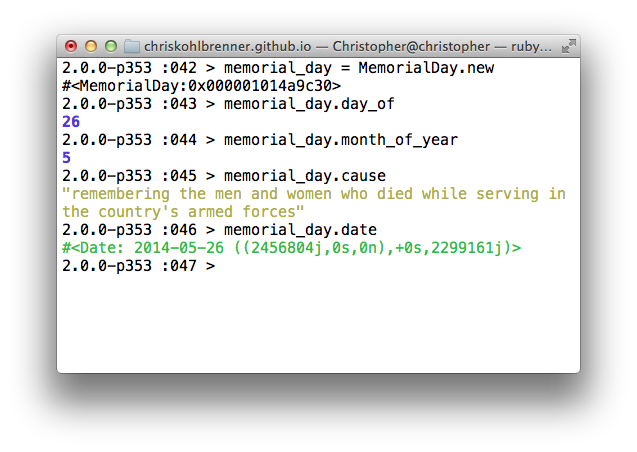