Redis, which got its name as a remote dictionary server, is a key-value data store that can be useful for temporary caching or as a NoSQL (‘not only SQL’) data store.

I recommend getting started with this post about Redis. It’s a little old, but covers some key use cases for Redis. In this post, I will provide an overview to get started with Redis. 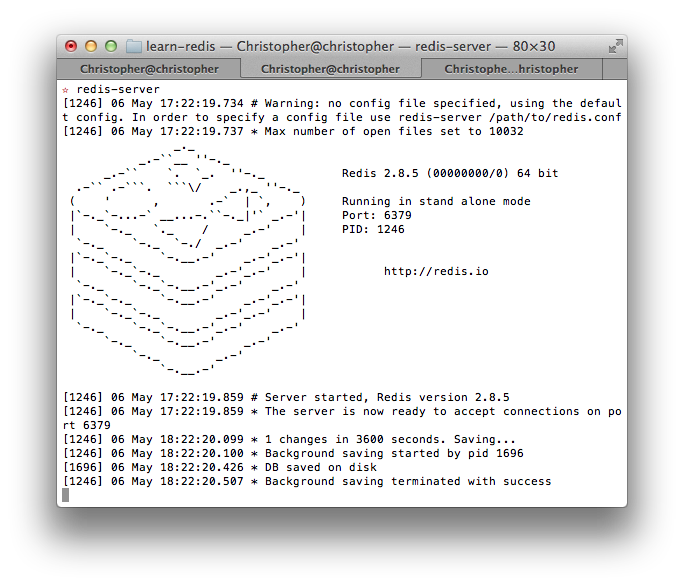 Once installed, starting a Redis server is as simple as running redis-server. You’ll know you have it working if you see some ASCII art like what’s depicted on the right.

You can view a full code example in this Github repo. It’s not really necessary to focus on the controller logic in sinatra_app.rb (it’s there to provide a user interface). This example can be viewed in the browser by running ruby redis_models.rb, starting a Redis server (redis-server), and visiting port 4567.

That said, we can look at the code without serving the example app. The snippet below gives a sense of some basics of Redis, which I’ll walk through line-by-line.

Side note: what’s happening in line 7 with include Singleton isn’t terribly important at this point. Suffice it to say that the Singleton class is needed when it is necessary to have only one instance of the class. In this case, we need one and only one instance of Redis. The super keyword uses the Redis superclass’ initialize method, which is written into the Redis gem.

So how is Redis being used? Notice some of the main keywords that are unique to Redis: lpush, sadd, and—two of the most fundamental ones—set and get, which we’ll see in more detail. I give an overview of the others at the end of this post.

Before we get too bogged down in the code, let’s try this from the command line. Everything I’ve covered up to this point can be done in IRB.

There are a number key Redis commands. Below, I define each (Redis.io has more information about data types and commands). Ruby syntax is each Redis command downcase.

Strings: Strings are the most basic kind of Redis value. Redis Strings are binary safe, this means that a Redis string can contain any kind of data, for instance a JPEG image or a serialized Ruby object.
Lists: Redis Lists are simply lists of strings, sorted by insertion order. It is possible to add elements to a Redis List pushing new elements on the head (on the left) or on the tail (on the right) of the list.
Sets (“S”…): Redis Sets are an unordered collection of Strings. It is possible to add, remove, and test for existence of members in O(1) (constant time regardless of the number of elements contained inside the Set).
Sorted Sets (“Z”…): Redis Sorted Sets are, similarly to Redis Sets, non repeating collections of Strings. The difference is that every member of a Sorted Set is associated with score, that is used in order to take the sorted set ordered, from the smallest to the greatest score. While members are unique, scores may be repeated.

That’s a quick intro to Redis. You can try Redis using Redis’ own “Try Redis” command line tutorial, but I prefer setting it up in an application or IRB environment myself.